A tomb may not seem like a place you would want to visit, but the General Grant National Memorial is something magnificent to behold. 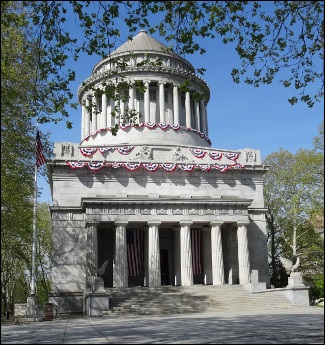 Before he was President Grant, General Ulysses S. Grant distinguished himself by leading the Union armies to victory during the American Civil War. Not only was he a skilled soldier, he was also instrumental in the ratification of the 15th Amendment of the Constitution (granting the right to vote regardless of "race, race, color, or previous condition of servitude") and the establishment of the National Park Service.

The Grant Memorial Association held a competition for the tombs design and on April 27, 1891, construction began. On April 27, 1897, the 75th Anniversary of Grant's birth, Grant's Tomb was dedicated. Over one million people attended the dedication. 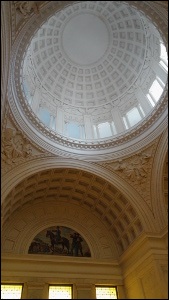 The tomb is stately and beautiful, constructed of over 8,000 tons of white marble. It has a magnificent domed ceiling that's a wonder to see towering above your head and it's well worth the visit, especially if you're a lover of fine architecture or an American History buff.

If you've heard the riddle "whose buried at Grant's Tomb?" and you think the obvious answer is "Ulysses S. Grant", you are wrong. If you visit the tomb, you'll understand why.

Pricing
It is FREE to visit.

Subway
Take the #1 train to the 116th Street-Columbia University station on Broadway. Walk six blocks North to 122nd Street, and two blocks West to Riverside Drive.
For a quicker commute, take the #2 or #3 express trains to 96th and change over to the uptown #1 train.