Often called "the Crossroads of the World", Times Square is one of the busiest intersections in New York City.  Its also the place to be on New Years Eve to witness the coming in of the new year symbolized by the dropping of the crystal ball, an event televised worldwide each year. 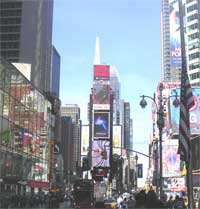 There a many shops, restaurants and theatres in the Times Square area, and if you're looking for New York City Souvenirs and memorabilia, Times Square has to be on your "places to visit in New York" list.

Pricing
Of course, its free to wander around Times Square

Bus - Taking the subway is much easier, but you can take the M42 crosstown or the M20 from Downtown.