One of the most recognizable landmarks in New York City, The Empire State Building is a monument to superb engineering and design. 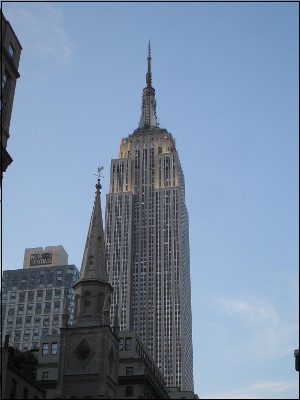 Built in 1931, it has graced the New York City skyline and a host of logos, T-shirts, buttons and many other items meant to remind you of New York City.

Take a ride up to the Observatory, and you'll get a bird's eye view of the Big Apple, and beyond.

Want to really see the city shine? Time your visit for dusk, and watch the city lights come out. The view is fantastic any time of year!

Subway
Preferably B, D, F, N, R, Q or NJ Path to 34th Street Herald Square (Sixth Avenue). Just look up to get the right direction (if you can't spot the building there's a problem), and walk one avenue to the Empire State Building. Or you can take any train that stops on or near 34th street and walk or take a crosstown bus to the Empire State Building.


Bus
Crosstown (East To West) M14 or M34 and get off at 5th Avenue.
Up or Down (North to South) Preferably M2, M3, M5 or any bus that stops near 34th street and walk or take a crosstown bus to the Empire State Building.