In the first part of these instructions you learned how to read a subway map, now lets find out how to get into the subway system, how much it costs, and some other useful information.

How to Get Into the Subway

Once you find a subway station, getting into the subway system is easy. The first thing you'll need to do is get a MetroCard. 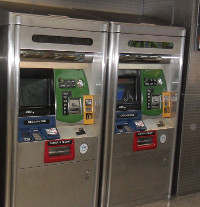 Gone are the days of the subway token, and cash or coins cannot be used to pass through the subway turnstiles. You can get a MetroCard at the token booth in the station, at the MetroCard vending Machine (also located in the train station), or at many Newsstands, Delis, Bodegas and other neighborhood merchants around the city.

How Much Does it Cost

Entrance into the New York City Subway Systems costs $2.75. However, there are several ways that you can reduce the cost of riding the subway.

If you are going to be in the city for 7 days, then the 7 day Unlimited MetroCard is the best value. Every time you re-enter the subway system or ride a bus (that doesn't involve a free transfer), you reduce the cost of each trip.

Keep in mind that once you use an unlimited MetroCard, whether its a 7 Unlimited or a 30 Day Unlimited, you cannot swipe the card at the same station for 18 minutes.

Before You Swipe Your Metro Card...

Look for any Service Advisory signs. These are very important because they let you know about any changes to subway service for the subway line you plan to ride.

This is the time to get directions from the token booth clerk if you find that after reading the subway map you're still not sure what train you should ride and which direction. Most New Yorkers don't mind giving strangers directions, but truth be told, most of us natives still get on the wrong train from time to time, or only know the directions to places we frequent. So, for the most reliable directions, ask the token booth clerk. After all, that's their job.

You've Passed Through the Turnstile, Now What?

You've successfully entered the subway system, you know which train you need, and what station you want to get off at. Here are a few tips to make the rest of you trip a breeze.

Once you know you can make a transfer from one train line to another at a particular train station, the actual

transfer is a breeze. In most instances, the various train lines run either on the same platform and you simply have to wait for the train you want to transfer to pull into the station, or you have walk a few stairs to a different platform. The Black and White Signs clearly indicate all transfers.

The New York City Subway system is the safest its been in 20 years. Here are some safety tips so that your trip on the subway will be a quick, easy and safe one.